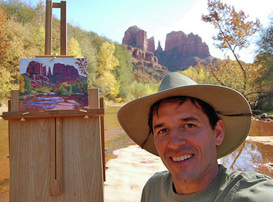 Steve at work in Sedona, AZ
Steve Simon was raised outside Chicago by immigrant parents from Luxembourg. As a youth, Simon enjoyed drawing but eventually pursued more technical interests. After receiving his bachelor’s degree in mechanical engineering, Simon practiced engineering in Germany. He later returned to Chicago to work as a management consultant.

While in Chicago, Simon participated in oil painting workshops in the evenings but still did not consider an art career. Still searching for his calling, Simon chose to pursue an MBA in international business during which he studied in Paris, New York, Tokyo, and  nine other cities throughout eastern Europe and Asia. At this point, his travels had brought him to over thirty countries as the cultural exposure continued to fuel the latent artist.

After receiving his MBA, Simon accepted a consulting assignment in Paris. Here he could explore the art world which so intrigued him. In his free time, he visited art museums and painted in his studio apartment in the famous artist’s quarter of Montmartre.  Upon completing the Paris assignment, it became clear to him that the artist within must be acknowledged.

It was then Simon made the decision to pursue his real passion. In 1994, at age twenty-nine, he moved to California to start his art career. He has since produced over 350 oil paintings, published seven art books of his work, created a broad selection of limited edition, canvas giclée prints, and owned an operated his own gallery on scenic Balboa Island, California for eight years. In addition to a broad portfolio of corporate gift clients, his collectors include a wide variety of private and government clientele, domestically and internationally.

In 2007, Simon moved to the dramatic Red Rock Country of Northern Arizona where he began painting  inspirations of the area’s dramatic landscapes. He resides in beautiful Sedona, Arizona with his wife, stepson, and daughter.
Creative Corporate Gift   •   steve@stevesimon.com   •   949-433-8943